Fawn Rescuers from the Tent Manufacturer

The life of the fawn in the spotlight of Mastertent - black button eyes saved!

For many years, the hunter Diether Platzgummer has been pursuing one goal: To save the fawn from mowing death. After a long period of persistent observations, fiddling and trial and error, he finally succeeded. Since this year the "Multiplex fawn rescuer" can be purchased. It stimulates the animals' sense of sight, smell and hearing at the same time and ensures that the fawn safely survives the hay harvest. With his idea, he came up to Mastertent...

With Passion for the Environment.

The company owner Georg Zingerle was immediately impressed by this idea. He could not withstand the sight into the black button eyes of the animals. Active as always, he and his employees dedicated themselves to the production. Together with Tecnomag, Mastertent further refined and finally implemented the idea of Platzgummer. Now the tent manufacturer, based in the agricultural South Tyrol, Italy, no longer produces only tents, beer table sets, inflatable advertising media and COVID-19 products, but also the "Multiplex fawn rescuer".

It is set up like an umbrella in the meadow in the evening before the mowing. Small bells, yellow-blue flags and a fragrant cap safely frighten the young animals and farmers can dedicate themselves carefree to the hay harvest.

Which Components of the Fawn Rescuer do we Produce?

All of them! The fawn rescuer pole is made of aluminium. Due to the nature of the light metal, it guarantees corrosion resistance and thus reliable function over the years. The fabric flags are made of the quality-tested Oxford polyester fabric. As fawns react especially to yellow and blue colours, which stand out well from the green meadow, this choice of colours was suggested by the developer Platzgummer. Also the felt cap at the top of the fawn rescuer is produced by Mastertent. The fawn rescuer Multiplex is available as a triple set, including fragrance. 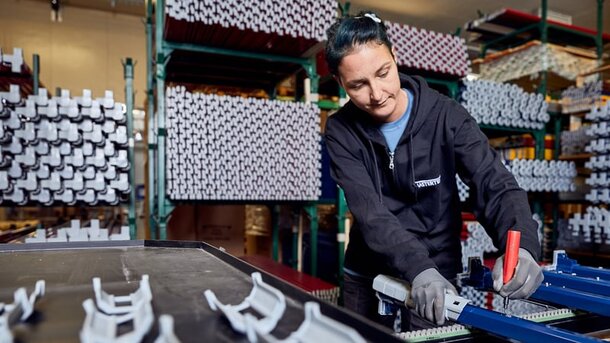 Why the Fawn Rescuer is Needed?

During the hay harvest in early summer, countless fawns get under the mower.

Precisely at this time, young fawns are born. Their survival strategy for the first weeks of their lives is to hide in the grass. They remain on the ground until enemies and predators disappear. Consequently, the animals stay in the grass, even when the farmers drive up with the mower. The ducked fawn is not visible to the farmers while mowing, they often only notice the young animals when it is already too late.

How Exactly Does the Fawn Rescuer Work?

The Multiplex fawn rescuer is put up like an umbrella, possibly on wind-exposed hills. To prevent the little deers from becoming habituated, the fawn rescuer should only be set up the evening before the mowing. The radius of efficiency is 150 metres, hence for larger areas the use of several fawn rescuers is recommended.

At the top of the Multiplex fawn rescuer there are fragrance diffusers to frighten off the animals. The fabric flags which turn and flutter in the wind, visually frighten the animals. A small bell acts as an acoustic warning. In summary, the Multiplex fawn rescuer addresses three senses: sight, smell and hearing. The fawns flee back into the woods and the farmers can start haymaking without any worries.

Mastertent is happy to be part of the initiative and to be able to actively participate in the rescue of the fawns with the black button eyes.

Environmentally Friendly Gazebos
See article
Our customers
What are you looking for?
Can we help?
Requests