Summit Climbers
at a Hight of 3212m

At a height of 3,212m, Mastertents folding tents are clearly "the most stunning summit climbers ever," reports Silvia Fontanive enthusiastically. She transported the folding tents by cable car to the Schnalstal glacier...

Silvia is the initiator and host of the show cooking event series "Südtirol kocht". Delicious aromas, tasty dishes and breath-taking locations characterise “Südtirol kocht”. "My cooking show is not just about presenting, but about entertainment, interaction and outdoor experiences," explains Mrs. Fontanive.

Her loyal and constant companions? The folding tents from Mastertent- 100% waterproof, weatherproof and fire-retardant. The altitude of 3,212 was also for the Loden tents a real premiere. Thanks to their practical packing sizes, they could easily be transported to the Schnalstal Glacier by cable car. Four women of the team were responsible for setting up the mobile kitchen studio outdoors. This time, however, they decided against the corner curtains in order to provide a clear view of the unique glacier panorama. "The folding tents are so flexible that they always fit into the picture. They give my show a particularly noble and professional touch. I'd love to put them into my living room at home...", Silvia jokes about her summit climbers.gazebos

Delicious pennete rigate with fresh Arsella shells and a creative main course composed out of lamb, gilthead seabream, primal carrot and caponata combined the tastes of the mountains with the sea. The 4 professional chefs as well as Sergio Moretti and his fishing team created according to the motto of the show “Mountains & Sea” true culinary delights.

Even the weather played along. It was just right for the summer finale of the live cooking show. Unexpectedly for the 3,212 m height there were summer temperature records… As the thermometer climbed higher and higher, Silvia and the cooks feared that it would soon become boiling hot under the dark Loden fabrics of the folding tents.

It didn’t - The loyal companions proved themselves as sun protection. Even after 5 hours under full sun it remained pleasantly cool under the folding tents. Particularly the kitchen team and the fishermen from Genoa were grateful. Already after the assembly in the early morning they were impressed about the Loden fabric of the tents. 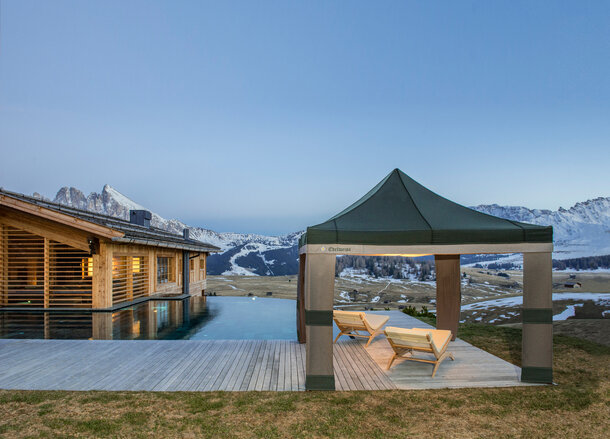 Kit Loden
Traditional and elegant at the same time. You cannot decide between an alpine-style gazebo and a classic one? With Mastertent you don’t have to. View Kit Loden
View Kit Loden

Proud and satisfied Silvia realised that the Loden tents are real all-rounders. She reports of the storm on the Seiser Alm, where the tents proved themselves as rain protection for the whole technology and of the stop in Val Gardena. At that time they used the headlights attached to the tent shears for the first time, because it dawned early due to a bad weather front.

We are already curious to see where the journey for our Loden tents will continue and look forward to more delicious and exciting stories.

Giovanni's fish stand and passion at the Venice fish market

See article
Our customers
What are you looking for?
Can we help?
Requests