for the "House of Life."

A tasty appetizer under one of the stylish loden tents, a bit of culture and lots of history by the way. What more could you ask for?

Seen, convinced and bought. Nicolas Wachtler and his father Michael Wachtler knew directly that the loden fabric of the tents perfectly matches the new project "House of Life". They only thought about where to deploy the loden tents after the purchase. Two of them have meanwhile found their final position. Are you curious about where? Read on and find out more about the loden tents and where coffee and brioche become an experience.

Michael Wachtler is known as the leading insider of the Dolomites. In the Museum Dolomythos, the Residence Wachtler, and the new bistro, the explorer welcomes guests from all over the world. "The house of life" is the philosopher's of nature latest project, explains his son Nicolas. At the construction of the building, mainly natural raw materials such as wood and natural stone, were used. It soon was evident in the interview that the Alps' fabric, the loden fabric of the gazebos, forms a unity with Michael's philosophy and, at the same time, with the furnishings and the concept of the house.

In addition to the nature and history of the loden material, father and son are particularly enthusiastic about the sustainability of the gazebos: "They simply remain beautiful forever and protect against sun, rain, and snow in equal measure," praise the new owners of the three loden tents 1.5x1.5 m. Nicolas talks about the self-test. He was sitting comfortably underneath for a whole hour and enjoying his lunch break. He affirms: "The tents have proven themselves as efficient providers of shade under blazing sunshine."

Two of the three loden tents 1.5x1.5 m have now found their place on the terrace of the new bistro which is located on the sun deck of the Museum Dolmythos. With a wink, he tells us that also the visitors are quite fascinated by the loden tents. He even caught some of them taking a selfie with the loden tents."

When designing the loden tents, the summerly character was an important concern for both of them. The corner curtains at the front tent legs invite to take a seat under the source of shade. The closed back wall and the half-open sidewalls on the right and left create cosiness and privacy on the otherwise spacious and very open terrace. Of course, function and flexibility were not neglected when choosing the sidewalls. In case of unexpected summer thunderstorms or cold draughts, the half-open sidewalls can be quickly closed. With additional weights, the lightweight aluminium gazebos can withstand wind and weather and offer guests protected outdoor space. 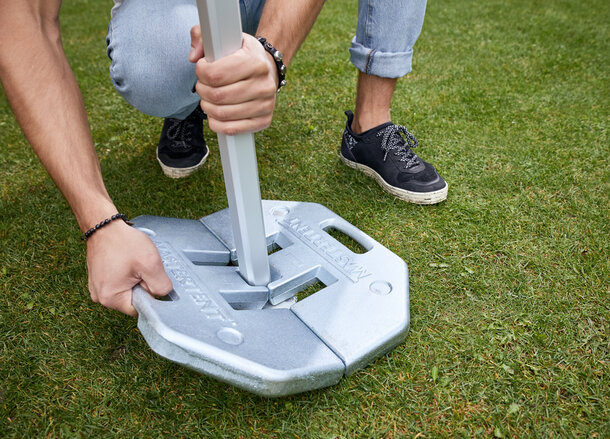 In winter the loden tents are used at the Christmas market. Together with the large 6x4 m gazebo, which the Wachtlers bought four years ago, the loden tents create a creative all-round-solution for their products presentation. In only 10 minutes all gazebos, including the products, can be stowed away weatherproof. This process used to take over 20 minutes, Nicolas reports. We are looking forward to a photo report of the creative solution!

When Sitting Together Becomes an Experience.

Combining culture and social life. This was the idea behind the new bistro on the sun deck of the Museum Dolomythos. "We serve culture together with espresso," Nicolas proudly explains. Whether culture enthusiasts meet in the bistro, or residents and guests meet for a get-together - history and culture are always a part of it. So the gaze of the guests, who are enjoying their coffee, aperitif or tasty snack under the historical loden fabric, automatically falls on the history of the Dolomites. The last 250 million years are shown in a mosaic form on the mural. Botanicals are carved into the cement floor of the terrace. Even a small part of the museum is open to the public without an entrance fee. 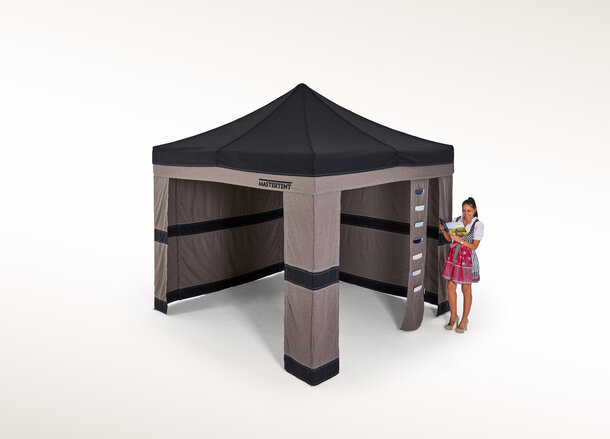 In love with the Dolomites?
You would like to get some alpine flair directly on-site or are you planning a cultural event? Find all information about the material with history here.
View the Kit Loden
View the Kit Loden

We are enthusiastic about the concept and are sure that we will soon visit the house of life. "One thing's for sure, Dad's not retiring for a long time yet," Nicolas whispers happily. We are curious about what will happen next in San Candido.

How Do I Clean My Party Tent?
See article

Culture for Espresso
See article
Our customers
What are you looking for?
Can we help?
Requests